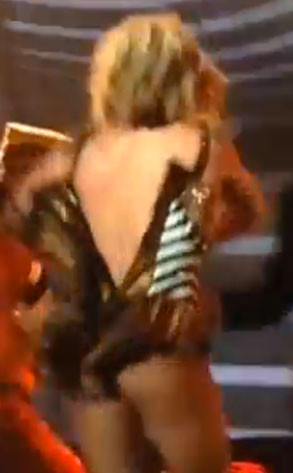 Britney Spears is barely into the first week of her three-year contract to perform in Las Vegas that some estimate will make her $100 million. However, while performing on stage on December 28, the voluptuous blond from Mississippi suffered a wardrobe malfunction when her sequined tights literally unzipped from behind while she performed her song "Circus" and twirled about. She visibly made a look of surprise when she experienced the sudden ventilation and flexibility from the costume on her backside.

However, Spears isn't the only professional on stage. One member of her entourage quickly ran interference by providing her a few seconds of cover while backup dancer began zipping up her costume. All this occurred in a matter of seconds and Spears didn't even appear to skip a single word of her song. It was all done so quickly as to look rehearsed. For anyone in attendance who might have briefly looked aside, they'd never know there was even a hint of a problem.

Times are certainly good for Mrs. Spears at the moment. She is receiving plenty of celebrity support for her concerts from the likes of Miley Cyrus, Katy Perry, and Selena Gomez. Most importantly, audiences are snapping up her tickets enabling her to perform before large crowds.