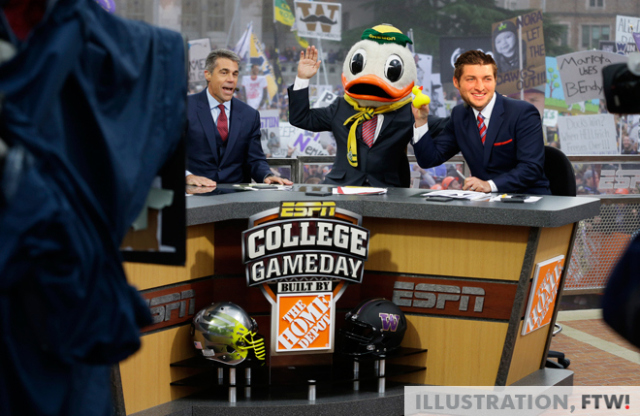 Tim Tebow, former Heisman Trophy winner has recently agreed to join ESPN as an analyst for the SEC Network which launches in 2014. The first episode will be Thursday, August 28 and he will be paired with Joe Tessitore who has been a part of ESPN for about a decade covering college basketball, college football and boxing.

It is a multiple year deal and was announced on Monday, December 30th. Tebow will be a college football analyst for the "SEC Nation," a travelling pregame show for football. He will also contribute to other ESPN platforms such as "SportsCenter," the network's Heisman Trophy coverage, and ESPN Radio.

According to Justin Connolly, ESPN senior vice president, programming, college networks, he believes that Tim offers a "wealth of knowledge about the game, the conference and the passion among SEC fans."

Earlier in the year, Tebow hired a broadcast agent so the hire and announcement was not a big surprise. Additionally, the former Florida Quarterback Tebow will still be able to pursue other opportunities within the NFL. He has played for the New England Patriots, the New York Jets and the Denver Broncos. He also helped lead Florida to two national championships.

Tim Tebow is going to work for ESPN
http://ftw.usatoday.com/2013/12/tim-tebow-espn-sec-nation-tv/

Spears faking abs: Impressive Abs, Not So Much