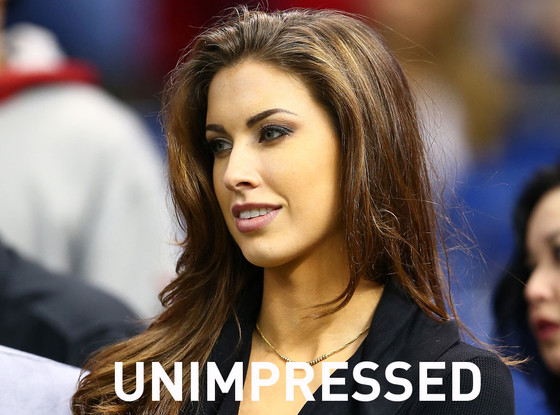 Photos caught Katherine Webb's reaction as her boyfriend AJ McCarron is sacked in the final moments of the Alabama Crimson Tide's Sugar Bowl loss. The former Miss Alabama appears horrified as the Tide botched the last minute of play. Katherine Webb started getting extra attention at the games after ESPN's Brent Musburger commented about her appearance on the air. He also added, "You quarterbacks, you get all the good looking women. What a beautiful woman."

The Thursday, December 2 Sugar Bowl was an upset for Alabama. They trailed the Oklahoma Sooners 38-31 with under a minute remaining in the fourth quarter. On their own 18 yard line, they needed to cover yards quickly to tie the game. Unfortunately for AJ McCarron, on first down Sooner linebacker Eric Striker broke the defense and sacked McCarron, forcing a fumble. The fumble was picked up by Sooner defensive end Geneo Grissom. He ran a few yards and made the touchdown, sealing the win for Oklahoma.

Katherine Webb Was Unimpressed at the Sugar Bowl, So What Will Impress Her?
http://www.eonline.com/news/495542/katherine-webb-was-unimpressed-at-the-sugar-bowl-so-what-will-impress-her

Beyoncé Throws a Shade at Rowland in Old Interview Clip