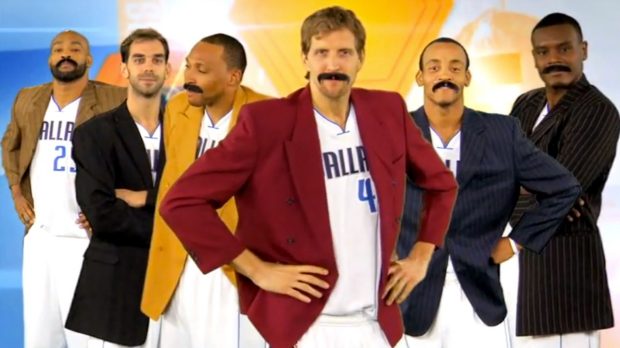 The Dallas Mavericks took a little time off from playing to have a little fun, Anchorman style.
[/caption]Dallas Mavericks' Dirk Nowitzki Spoofs Ron Burgundy
With the popularity of the recently released "Anchorman 2" movie not waning in the least, the Dallas Mavericks decided to film a spoof promotional video in which Dirk Nowitzki portrays bombastic newsman Ron Burgundy. Nowitzki is joined by fellow Dallas Maverick players Monta Ellis, Vince Carter, Shawn Marion, Jose Calderon and Samuel Dalembert. With Nowitzki appearing front and center, each of the men is garbed in the traditional 1970s news anchor blazer as well as fake mustaches, with the exception of Calderon who already sports his own facial hair.

Each of the players spoofed the "Anchorman 2" movie by posing as a member of a fictional "Starting 5" news team, actually composed of 6 team members, with Calderon taking the role of a foreign news correspondent and Ellis weighing in as the "Starting 5" film critic. Dalembert was assigned to be the station weatherman, assuring everyone that "the weather is fine up here." But the starring role of Ron Burgundy went to Dirk Nowitzki, who appears front and center in a handsome burgundy colored blazer. Of course the spoof promo is accompanied by realistic news promo music as used by countless news reporting shows throughout the late 1970s and early 80s.

Check out the Dirk Nowitzki Ron Burgundy Parody video below.

Dirk Nowitzki is Ron Burgundy, at least in this video
http://msn.foxsports.com/southwest/story/dirk-nowitzki-is-ron-burgundy-at-least-in-this-video-010414