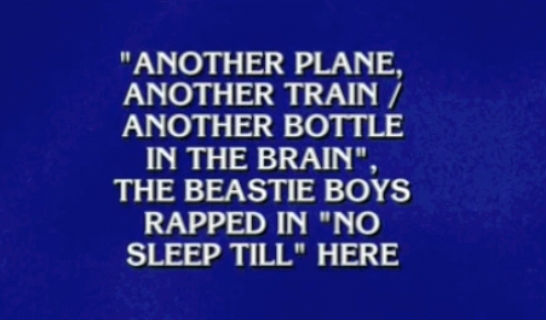 Alex Trebek, the host of Jeopardy for over 30 years, spent a portion of Monday night's broadcast rapping for the audience. A category of questions presented during the show included rap lyrics as clues to the answer. Trebek took it upon himself to offer up his own rap rendition of the famous lyrics.

The category, "Its a Rap", was part of Monday evenings Double Jeopardy segment in which points are doubled for each correct answer. The category included lyrics from Notorious B.I.G, Grandmaster Flex, Dr. Dre and The Beastie Boys. Trebek shared the lyrics by reciting them, in a monotone rap, for the contestants.

While Trebek's delivery of questions has been unwavering in the three plus decades that he has hosted Jeopardy, many who watched the show Monday evening felt an urge to comment on the performance. Thousands took to Facebook and Twitter to discuss Trebek's recitation of famous rap lyrics. Some of the commentary noted that the entire category made for awkward television, while other's considered the unorthodox category and Trebek's delivery "awesome" and "hilarious".

Jeopardy's current incarnation has been on the air since 1984, with Trebek hosting all of the 6,000 episodes that have aired. Prior to the 1984 version, several similar shows ran in the 1960s and 1970s. Trebek is expected to retire in 2016.

Check out a video of the alex trebek jeopardy rap below.