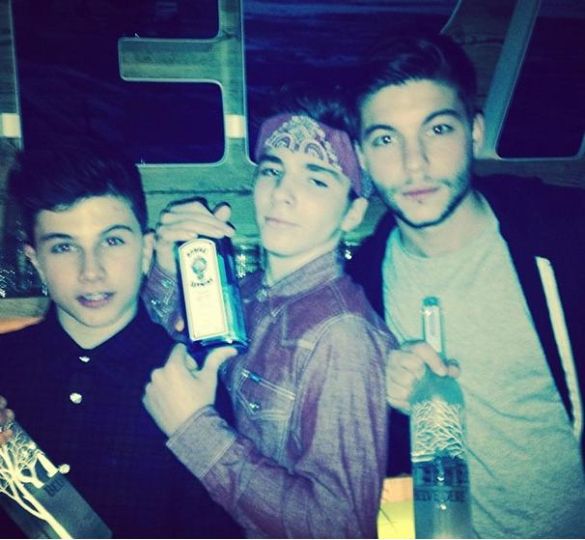 Proud mama Madonna posted photos of her 13-year old son, Rocco, with ex-spouse Guy Ritchie recently on Instagram and has been hit with a backlash of criticism for showing the boy holding a bottle of alcohol. Rocco was seen with several other boys in the photo, taken on New Year's Day, with each of them holding a full liquor bottle. The "Material Girl" pop star was quick to lash back at her critics, explaining that the photo was taken in fun, no one at the party was actually drinking the hard stuff and criticizing her critics for being so judgmental without first knowing all of the facts.

“No one was drinking we were just having fun! Calm down and get a sense of humor! Don't start the year off with judgment!” she posted, along with another photo of the boys, this time without alcohol.

Madonna rang in the New Year on holiday in Switzerland, accompanied by her four children. Whether or not drinking was involved, Madonna had reason to be in a celebratory mood, having recently been named the highest paid musical artist, topping even the popular Justin Bieber and Lady Gaga. In addition to posting the controversial photo that implies she encourages her teenage son to drink, Madonna also posted the one New Year's resolution she is determined to keep: "Just f**king own it." She hopes her critics find their sense of humor in 2014.

On The Web:
Madonna posts picture of underage son with alcohol
http://www.digitalspy.com/celebrity/news/a541605/madonna-posts-picture-of-underage-son-with-alcohol.html

Related Topics:madonna posts photos of son
Up Next