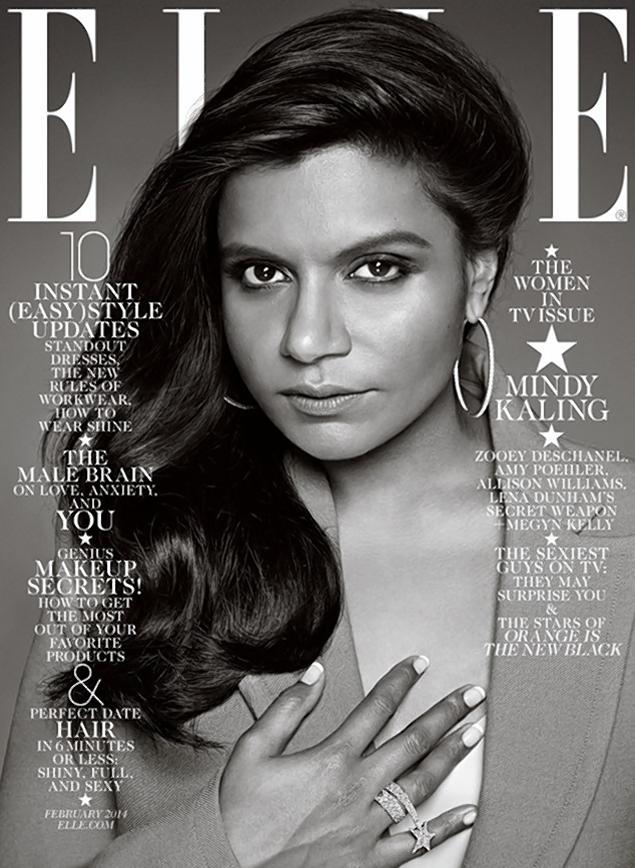 CARTER SMITH/ ELLE MAGAZINE Mindy Kaliing on the cover of the February 2014 Women in TV issue of Elle magazine. Kaling's treatment in the shoot — a close crop in black and white — caused controversy when compared to the other women featured on the cover. [/caption]Mindy Kaling's Elle Cover on Sale January 14

Elle Magazine is featured in 43 different languages and enjoys a collective readership of 23 million people.

However, for the February 2014 edition in stores on January 14, the magazine took a page out of the Copper Age of Comic Books: the issue was released with variant covers. Each of the covers features prominent women in American television. The ladies are Amy Poehler of "Parks and Recreation", Allison Williams of the HBO Series "Girls", the ever lovely and self-declared "adorkable" Zoey Deschanel of "New Girl", and Mindy Kaling of "The Mindy Project".

Mindy Kaling has long been a darling among women for her intelligence and taste for fashion. A loyal group of followers has sprung on the internet to track the fashion trends she displays in her Fox Network sitcom about an obstetrician/gynecologist struggling to maintain a work-life balance.

The Kaling cover is shot in black and white which works very well with her brown skin tone.

Bloggers speculated that the close-up treatment for Kaling was due to the 34-year-old's curvy physique, but the actress didn't seem to have any concern about the image.

"I love my @ELLEmagazine cover," she tweeted Tuesday. "It made me feel glamorous & cool. And if anyone wants to see more of my body, go on thirteen dates with me."

In A 2011 interview with NPR, Kaling said she was happy with her curves.

"Since I am not model-skinny, but also not super-fat and fabulously owning my hugeness, I fall into that nebulous 'Normal American Woman Size' that legions of fashion stylists detest," Kaling explained. "For the record I'm a size 8 (this week, anyway). Many stylists hate that size because, I think, to them, I lack the self-discipline to be an aesthetic, or the sassy confidence to be a total fatty hedonist. They're like pick a lane."

Some critics of the cover say the cover photo is another example of how Hollywood shuns the physique of the average woman.

"The creative direction is curious, given Elle's murky history when it comes to showcasing fuller-figured women," Elise Sole argued on Yahoo! Shine.

"For all we know, Kaling directed the whole shoot. Does it matter?" Julia Sonenshein wrote on The Gloss. "The message is still the same: we treat a certain type of woman differently than the other celebrities in her cohort."

In a statement to E! News, the magazine supported their decision.

"Mindy looks sexy, beautiful and chic," the statement read. "We think it is a striking and sophisticated cover and are thrilled to celebrate her in our Women in TV Issue."

The 34-year-old actress from Cambridge, Massachusetts landed her first big role as the character "Kelly Kapoor" on the popular sitcom "The Office" where she starred in the first eight seasons and appeared in 161 episodes. As per Time Magazine, she is one of the world's 100 most influential people.

What do you think of the mindy kaling Cover? Was the magazine intentionally trying to "cover her up"?