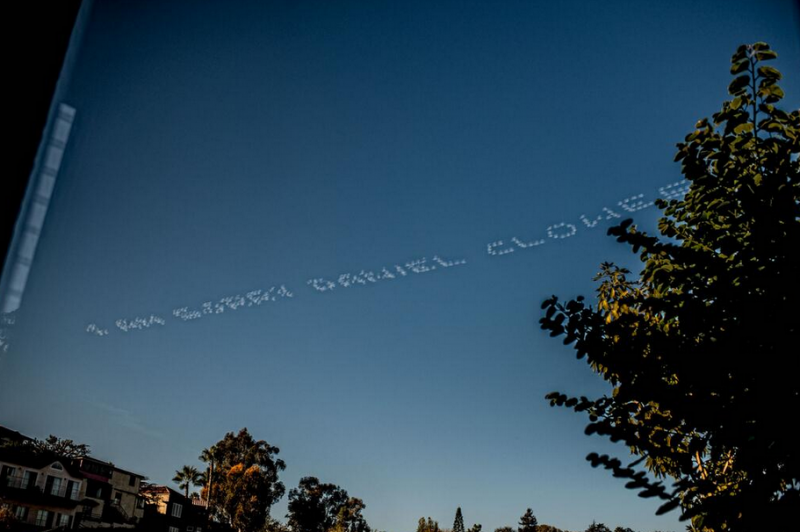 Actor Shia LeBeouf may have a new appreciation for the timeless Spanish adage which reads "Aquel que quiere azul celeste, que le cueste" (He who wants the blue sky, may it cost him). LeBeouf hired a team of skywriters to post his apology to Los Angeles writer Daniel Clowes over the skies of Los Angeles. The apology spanned a distance of 5 miles and simply read that he is sorry.

“The first I ever heard of the film was this morning when someone sent me a link. I’ve never spoken to or met Mr. LaBeouf,” Clowes told BuzzFeed. “I’ve never even seen one of his films that I can recall — and I was shocked, to say the least, when I saw that he took the script and even many of the visuals from a very personal story I did six or seven years ago and passed it off as his own work. I actually can’t imagine what was going through his mind.”

The sky written message was also accompanied by tweets to the same message. Just why is the 27-year-old star of the Transformers franchise to eagerly apologizing? Roughly three weeks ago it became public knowledge that LeBeouf's 2007 short film entitled "HowardCantour.com" was inspired by a graphic novella by the name of Justin M. Damiano. Fine. However, the film did not credit Clowes for the text which inspired the film. In other words, LeBeouf took credit for the inspiration which makes him guilty of plagiarism.

Writer Daniel Clowes doesn't mind the apologies per se, but he does expect them to be accompanied by compensation which is the one thing missing from LeBeouf's apologies. Clowes is now looking to take legal action. As for the skywriting message, he didn't see it as he lives in the Bay Area hundreds of miles north.

On The Web:
Shia LaBeouf Hires Skywriting Team to Apologize for Plagiarizing
http://www.usmagazine.com/celebrity-news/news/shia-labeouf-hires-skywriting-team-apologize-for-plagiarizing-201421

Related Topics:LaBeouf in trouble over skywriting apology
Up Next