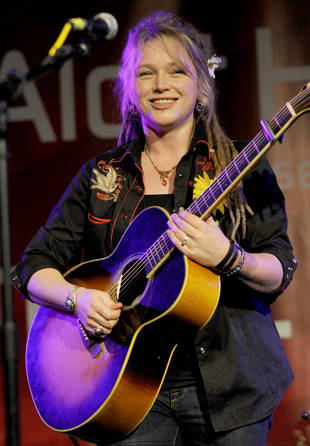 Indie folk rock singer and former American Idol season 9 contestant Crystal Bowersox recently opened up about her bisexuality on the program "Good Morning L.A.". The 29-year-old singer from Elliston, Ohio, recalls being ridiculed by peers in junior high school over her bisexuality. She refers to the treatment as a "shameful" which ought not to be.

“I’ve been bisexual for as long as I can remember,” Bowersox told reporters in November. “I remember being made fun of in junior high for that. It was something that was shameful, and it really shouldn’t be.”

Bowersox is recently single following her divorce from husband Brian Walker eight months ago last May. She said that her bisexual feelings have always been a part of her for as far back as she can recall. It is interesting that the show which gave rise to her fame has also helped other gay entertainers achieve fame. Both Clay Aiken and Adam Lambert are openly gay. However, like Bowersox, they only acknowledged their sexual orientation after their time on the show had ended.

It may be that American Idol is compelling gay performers to hide their sexual orientation until after they are done competing on the show. Now, neither Bowersox, Aiken nor Lambert have said that. Rather, Adam Levine of Idol's chief rival "The Voice" makes that allegation. "The Voice" has brought up competitors who have been openly gay which is something that has yet to occur on American Idol.

“The more people who come out who are in the public eye, the better chance some high school school student has to love and accept themselves.”

Related Topics:Crystal Bowersox bisexual
Up Next