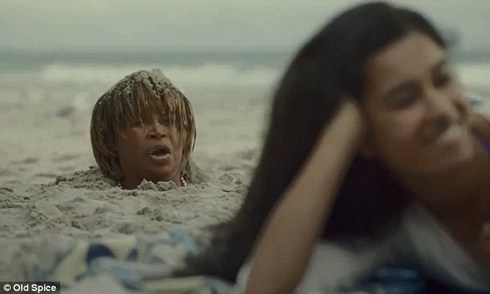 Men's cologne company Old Spice has scored big with audiences in their latest 30-second ad which features mothers "creeping" on their sons who are on dates with beautiful women. The concerned mothers quasi-stalk their sons against the background of the tune "Moms Song". In every case, the mothers blame Old Spice for the sudden fixation preying women have on their sons.

"New Old Spice Re-Fresh Body Spray may cause boys to become men, girls to become girlfriends, and moms to become sad," reads the video's caption — though upon viewing the ad, one can't help but feel that "sad" is a bit of an understatement.

According to John Sebastian, marketing director for the company, the ad is part of their ongoing effort to pitch their product to the 12-14 age group of young boys and by extension their mothers who will likely make the purchase. Since its release, the video clip has been viewed over one million times giving it viral status. Sebastian says the ad is all about bringing mothers together to promote their sons growing into men.

The mom in the ad, most of them sobbing, appear in various states of disguise while watching their sons flirt with girls and participate in other "manly" activities.

"Old spice sprayed a man of my son, now he's kissing all the women and his chores aren't done," sing two crying women at the beach, one of whom watches her son whilst partially buried beneath the sand.

Adweek called it their Ad of the Day, while also calling it “creepy-crazy.” Grantland’s Mark Lisanti seemed far more disturbed: “Smellcome to Manhood, they say. Smellcome to your nightmares, forever.”

Old Spice has a good track record of coming up with viral content to promote their product such as the ad called “The Man Your Man Could Smell Like" which featured Isaiah Mustafa. In the latest ad, one mother hangs on to her son's car as he pulls away. She is riding a laundry basket along the highway. The video follows Old Spice's shtick of excessive responses to the power of their cologne.

The video was liked more than 6,400 times on Facebook in its first 10 hours, and most of the comments were from people who said it brought them to tears. “If you are a Mom, don’t watch this at work. Everybody wants to know why I’m crying!” wrote one commenter using the name Lori Travis.

The commercial had more than 120,000 views as of Monday. P&G’s “Best Job” spots from the London 2012 Games garnered more than 21 million views and picked up a commercial Emmy, the company said.