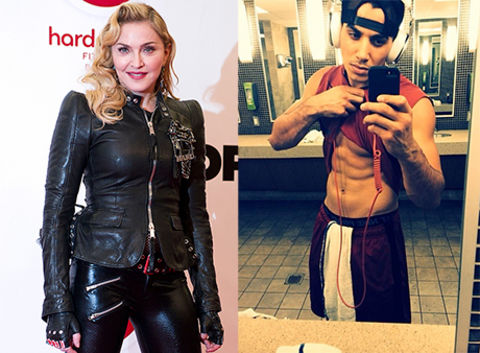 Madonna is at it again. She has a new boy toy boyfriend. This one is half her age and apparently good to go. Madonna may be 55 years old, but she says she can't get enough of her 26-year-old boy toy, Timor Steffens. They met a private New Year's Eve bash at the lush digs of Rudolph Valentino, a hot designer. The party was in Gstaad, Switzerland.

Madonna says the chemistry between her and Steffens is pretty intense. No doubt since she hired him as a backup dancer following her breakup with "old" boy toy of three years Brahim Zaibat. Having a new boy toy doesn't mean everyone is singing Madonna's praises. Her arch-nemesis Elton John said it was ridiculous that people were kissing Madonna's posterior at the party when she was with a new guy less than a month after breaking up with Zaibat. Some people at the Swiss soiree agreed with Sir Elton. Perez Hilton said partygoers were whispering nasty comments about the new liaison, but Madonna didn't care. The new guy is so much younger than the "Like a Virgin" superstar that people were barely concealing contempt. Hilton, though, praised Madonna for rebounding with such a hottie.

Related Topics:Madonna new boyfriend
Up Next