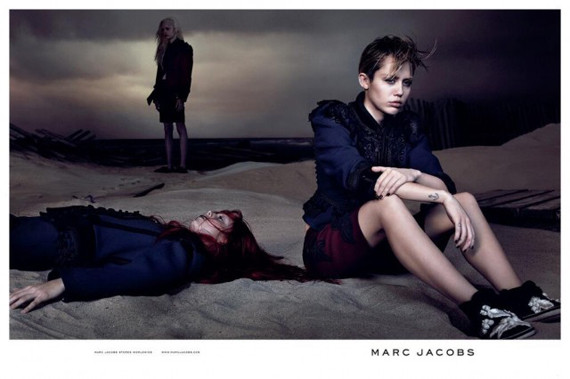 Fans and critics are not surprised by his decision since Cyrus regularly wears Jacobs' fashions, and credits him with introducing her to the fashion scene and being her "mentor."

In one ad for the campaign, Cyrus sits in the foreground of a dark and bleak beach scene wearing an embroidered navy coat with maroon shorts. Her tattoos and black nails are on clear display as if commenting about her rebellious nature. She is brooding. Next to her is a red-haired girl who looks dead, or pretending to be dead, and behind her in the background is a blonde girl who seems lost in thought.

In another ad, Cyrus sports sunglasses and a partially sheer dark top while the red-haired girl, also wearing sunglasses, lies on the beach behind her.

Jacobs admits the campaign is supposed to be “sulky.” He stated that he picked Cyrus because there's nothing he doesn't like about her. He stated that he likes “her entire being, her energy, her talent, her intelligence, everything” and that she's “genuine and very natural."
[caption id="attachment_77512" align="aligncenter" width="570"]