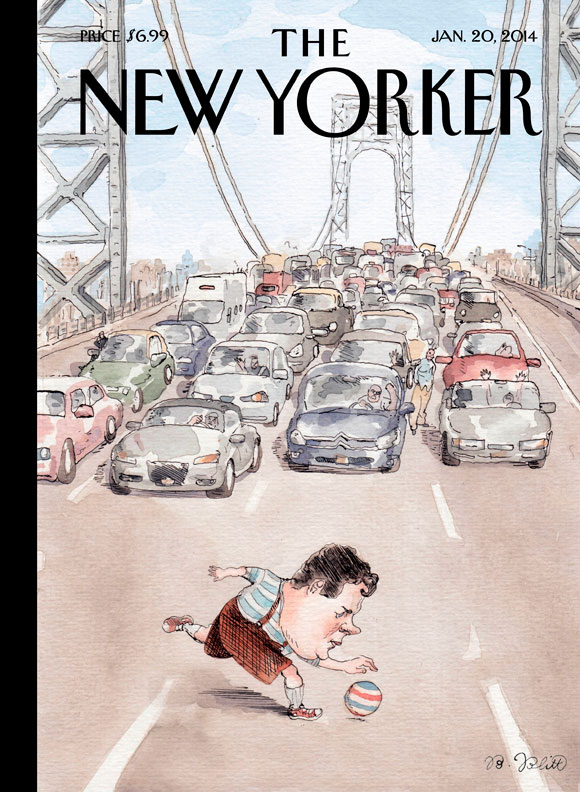 The current issue of the New Yorker features a political cartoon depicting a traffic jam atop the George Washington Bridge with angry commuters standing outside their vehicles yelling at an oblivious fat child in short jumpers dribbling a multicolored rubber ball. The fat child is New Jersey Chris Christie and the caption to the cartoon is "Playing in Traffic." Ouch! However, an elected official is fair game for criticism and this scandal goes straight to the governor’s office.

The firestorm kicked off earlier this week when it was revealed that the lane closures on the bridge were designed to punish Mark Sokolich, the mayor of the city of Fort Lee, for withholding an endorsement from Christie during his successful campaign to get reelected this past November. Governor Christie has been successful at reforming a number of institutions in his state against mounting opposition from unions and other interests desirous to maintain the status quo.

Christie himself has tried to walk a line of a being a true bipartisan governor by warmly embracing President Obama during the 2012 presidential campaign a fortnight before the election. Up until this scandal, he was the presumptive nominee by the moderate wing of the GOP. It is unclear at this time whether this scandal will derail his presidential aspirations.