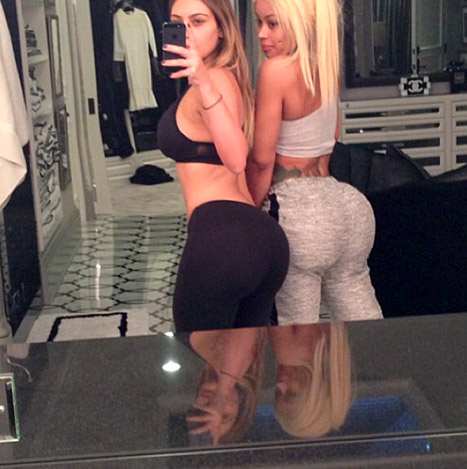 By now, most people who follow socialite Kim Kardashian have been treated to the selfie she took alongside gal pal Blac Chyna wherein the two ladies “booty tooched” in a big way. The photograph highlighted Kardashian's large rump against a toned and narrow waist. As for Chyna, she clearly had a larger 4th point of contact, but it could well be the result of implants.

Now, the tabloid site RadarOnline has come forward to allege that the photographed may have been photoshopped to decrease the size of her waist and heighten the size of her posterior. As per the anonymous expert, the tell is the curved bathroom door which indicates manipulation of the digital image.

Admittedly, upon taking another look at the photograph, it does appear that there is something amiss. However, Kardashian's publicist flatly rejects any notion that the photograph was altered in any way. Her rep even went so far as to deny that the image has been photoshopped. If that wasn't enough, Kardashian herself has spoken out on the matter via an extended tweet. In her message, she claims that she works very hard to maintain her figure and it is displeasing to see false rumors surface that denigrate the hard effort she puts into her appearance.