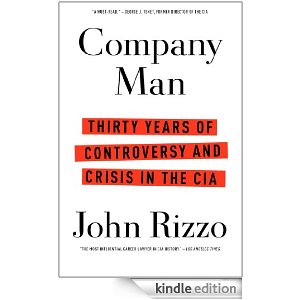 John Rizzo spent 33 years of his life as a special counsel for the Central Intelligence Agency and is now poised to cash in on his experience via a tell-all book called "Company Man: Thirty Years of Controversy and Crisis in the CIA

". During his time at the CIA, he approved the controversial practice of water boarding as a legal means of extracting information from terrorists.

However, in his new book , Rizzo chronicles how Hollywood moguls and stars assisted the CIA as quasi-operatives. He claims that Hollywood stars make excellent spies. He goes on to say that Hollywood stars are able to gain access to world leaders who are often eager to get chatty with the celebrities. Also, a prominent Hollywood producer, director, or actor can bring in their own film crews to record interviews with world leaders and gain unrestricted access to places the US Government cannot.

These are people who have made a lot of money basically creating make-believe stuff,' Mr Rizzo wrote, explaining why actors worked as perfect covers for intelligence operations.

'Their power and international celebrity can be valuable—it gives them entrée to people and places abroad. Heads of state want to meet and get cozy with them. Their film crews are given free rein everywhere, even in places where the U.S. government doesn’t normally have it.’

In one particular instance, he said that an actor wanted to be paid in cocaine for any assistance he would provide the CIA. The unnamed celebrity wanted the CIA to give him $50,000 worth of grade-A "Columbian gold", but Rizzo turned down the offer. In the end, the celebrity helped out the CIA on a pro bono basis.

From Hollywood stars demanding cocaine to waterboarding terror suspects: The CIA's top lawyer tells all in a new book about his three decades at the intelligence agency
http://www.dailymail.co.uk/news/article-2536630/From-Hollywood-stars-demanding-cocaine-waterboarding-terror-suspects-The-CIAs-lawyer-tells-new-book-three-decades-intelligence-agency.html