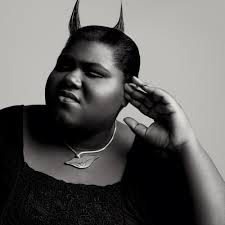 Gabourey Sidibe, the obese actress who made her breakout role in 2009 film "Precious", had a pithy reply to those critics of her weight. She replied that those who criticize her for not managing her weight made her cry. The 30-year-old added that she cried all the way back to her dream job aboard a private jet.

However, the critics were not commenting on her star power nor her lucrative employment on the hit show "American Horror Story: Coven". Their remarks were directed at her obesity. Her weight is estimated to be between 330 - 400 pounds and she stands only 5'5".

Yes, it is true that Ms. Sidibe is making lots of money, but artery clogging cholesterol is not abated by the pimped out nature of her personal jet. Nor are her kidneys getting respite from dietary stress because she loves her work.

For her appearance at the Golden Globe Awards, she arrived in a light orange colored gown by designer Daniel Mustro. The dress shimmered and was complemented by Barefoot Tess heels. Her fellow co-star Jessica Lange was once again nominated for "Best Actress Mini-series or Motion Picture Made for TV" for her role in "American Horror Story: Coven", but did not win.

On The Web:
gabourey sidibe shuts down critics
http://www.clutchmagonline.com/2014/01/check-gabourey-sidibes-flawless-shut-twitter-critics/

Gabourey Sidibe Responds To Rude Comments About Her Weight In The Best Possible Way
http://www.huffingtonpost.com/2014/01/13/gabourey-sidibe-weight-comments-golden-globes_n_4591417.html