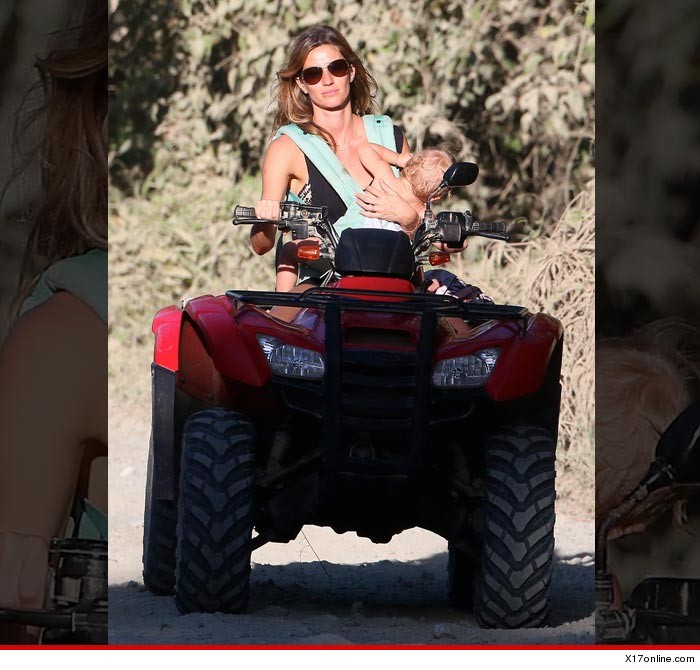 Brazilian beauty Gisele Caroline Bündchen is without question a stunningly attractive women which is what has provided her a lucrative modeling career. She is married to Tom Brady who is the quarterback for the New England Patriots. The couple have two children Benjamin born in 2009 and Vivian Lake born in 2012. All is well for the Brady family. The same holds true for Bündchen's career where she has remained the modeling industry's highest paid model for the past ten years straight.

However, what is sparking a controversy of sorts is her fixation on driving her all-terrain vehicle (ATV) along her infant daughter and no use of a helmet. While on vacation in Costa Rica, a photograph of the former Victoria's Secret model showed her driving the ATV with her right arm while holding onto little Vivian Lake with her left arm. Admittedly, the ride was on level ground and likely at a slow pace. No one is saying that she's driving recklessly with or without her daughter. Still, it is the lack of safety precautions that concerns people. This marks the second time that Bündchen has been spotted with her child in an ATV this way. The first time she did it was when Vivian Lake was only 3 months old.

On The Web:
Gisele Bundchen rides ATV with baby and no helmets
http://boston.com/community/moms/blogs/parent_buzz/2014/01/gisele_bundchen_rides_atv_with_baby_and_no_helmets.html

Related Topics:gisele baby atv
Up Next