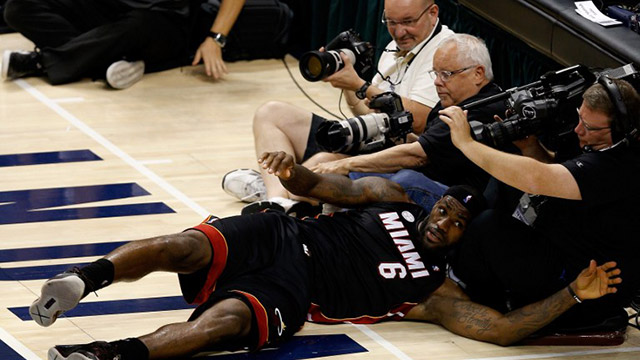 "LeBroning" is the newest viral breakout sweeping the nation. It draws inspiration from Lebron James, the Miami Heat superstar and consists of taking a dramatic dive when lightly grazed by animal, player, or even mineral, that is to say solid nothing. Completing a proper #LeBroning sequence entails making an angry face and saying it's not your fault you're on the ground.

A goofy YouTube video started the craze as it went viral. The video shows teenagers at a shopping mall making pratfalls when lightly touched by strangers. The over-the-top falls are a scream.

It's based on James' apparently flagrant habit of taking a dive. Opponents and media have been all over his case with flopping criticism. The NBA started an anti-flopping policy last season. Players are warning once. After that, they are subject to progressively stiffer fines if they violate the rule.

James vehemently denied he's a flopper although the NBA fined him $5,000 last year for flopping in the Eastern Conference finals against Indiana Pacers. James' denials have a hollow ring, however, since he was quoted in May 2013 as saying flopping was just about trying to get a competitive edge, adding that was OK if it worked.