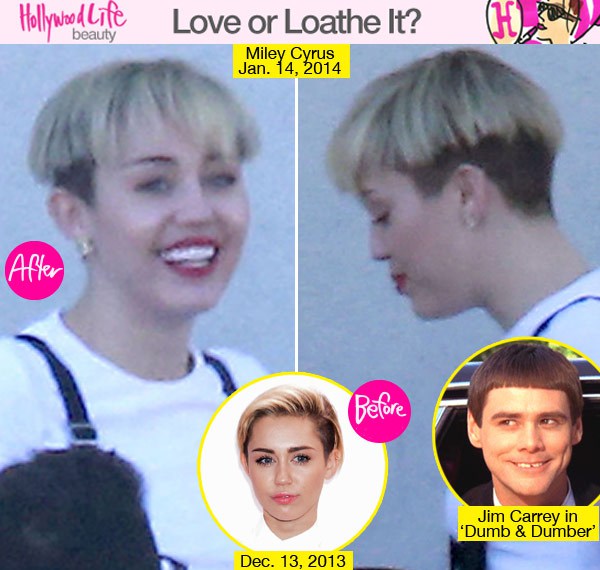 According to Hollywood Life, Miley Cyrus has pulled off yet another shocking media move, this time involving her hair, rather than her breasts or bottom.

A report on the Radar Online website, dated January 7, made the astonishing claim that Miley Cyrus was in the course of a nasty, all out "hair feud" with Hollywood rival Jennifer Aniston. It seems that the source of the cat fight was the relationship Miley and Jennifer both share with Aniston's best friend and hair stylist, Chris McMillan.

An anonymous source was quoted by Radar Online as having this to say about the feud: “Miley has radically remade her look with the help of handpicked hairdresser Chris, but the successful creative collaboration between the pair is headed for splitsville because of Jen.”

Speculation is running rampant in the media concerning whether this radical new bowl cut, which is already being compared to the similar hairstyle sported by Jim Carrey in "Dumb And Dumber", is due to Cyrus' own invention, or whether McMillan had anything to do with it.

It has even been reported that Miley and Jennifer are in the throes of a territorial feud regarding the services of the hot and hunky hairdresser.

Di Caprio PDA: Leo Gets Kiss From Girlfriend After Win