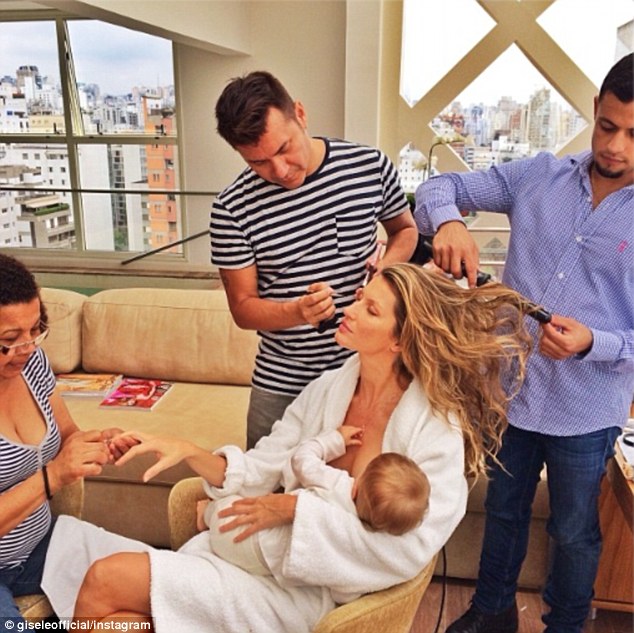 Smug much? Gisele sparked criticism last week for posting a picture of her breastfeeding daughter Vivian while getting her hair and makeup done
[/caption]Gisele Bündchen Responds to Critics of Her Baby ATV Riding

33-year-old Brazilian beauty Gisele Bündchen has responded to critics regarding the recent flap over photographs of her riding an ATV vehicle with one hand on the steering wheel and the other holding her one-year-old baby. Bündchen also did not wear a helmet. Speaking through her spokesman, Mrs. Bündchen clarified that she was on a private beach driving ever so slowly.

“Gisele was on a private beach driving very, very slowly,” the rep said.

According to E!, under Costa Rican law, drivers must be at least 16 years old with a valid license; underage riders are not permitted on ATVs. In the United States, where Bündchen and her family of five currently reside, there are no national laws regulating the use of four wheelers; it is up to the state. However, only a handful of states currently prohibit children under the age of 16 from using adult models.

Regardless of how a person might view Bündchen's driving behavior, her reply was absolutely classy. Imagine if the person carrying the baby had been Justin Bieber, critics would possibly have spittle in their face and eggs on their homes not to mention a verbal reply that would require censorship.

Bündchen is known for her candor as illustrated in a 2010 Harper’s Bazaar UK interview when she spoke on the subject of breastfeeding. She said that it is absolutely in the best interest of the baby to nurse off mother's milk instead of chemicals.

She feels so strongly about the issue that she favored global legislation requiring breastfeeding for the first six months of the child's life. She also expressed her belief that women eat healthy during their pregnancy to avoid being garbage disposals. She also added that exercise during pregnancy is important.

On The Web:
Gisele Bundchen Defends Riding ATV With Baby and No Helmets
http://abcnews.go.com/blogs/lifestyle/2014/01/gisele-bundchen-defends-riding-atv-with-baby-and-no-helmets/

Oh, What Could Have Been, Hathaway bailed on Silver Linings