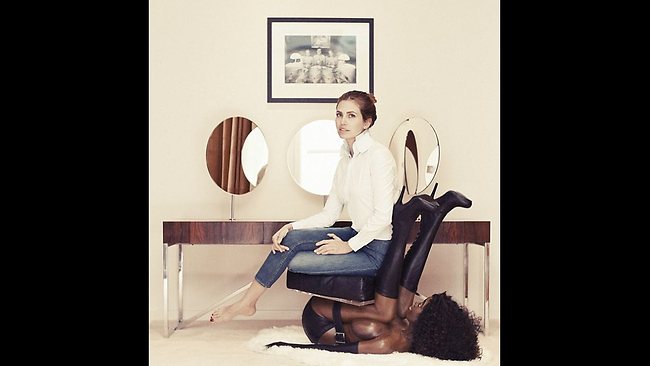 Dasha Zhukova, editor-in-chief of Garage Magazine, posed in what she believed would be an avante garde photograph of a chair which consisted of her sitting atop a chair made of a black seat cushion atop the hinder part of a black woman's thighs. The black woman was on her back with her legs pulled up to her chest covering her bare bosom with her body serving as the base and back support to the chair.

The photograph was taken by Buro24/7.ru as part of a collection of artistic photographs. However, it has touched off a firestorm of criticism that it promotes the exploitation of Black people being used in degrading purposes for the benefit of white people. Both Buro24/7.ru and Dasha Zhukova have issued separate apologies for the photograph while emphasizing that creative art was the objective not racism.

It didn't help matters at all that the photograph was released at the same time that the late Dr. Martin Luther King's life was being celebrated. Critics charge that the photograph is typical of two bastions of society that continue to get away with racism: the fashion industry and the art world. No one is alleging that Buro24/7.ru nor Zhukova had a hidden agenda. That doesn't change the fact that the insensitivity about racial issues is concomitant to institutional racism.

According to the Telegraph, the piece of furniture is similar to the British pop artist Allen Jones's 1969 sculpture entitled 'Chair', which showed a white woman in the same pose and another on all fours, propping up a glass coffee table. Tee one in the portrait was designed by Bjarne Melgaard, a Norwegian-born, New York-based artist.
[caption id="attachment_78262" align="aligncenter" width="532"] One of Allen Jones's sculptures from the Sixties. Photo: EPA
[/caption]

UPDATE: Dasha Zhukova has since released the following statement:

The chair pictured in the Buro 24/7 website interview is an artwork created by Norwegian artist Bjarne Melgaard, one of a series that reinterprets art historical works from artist Allen Jones as a commentary on gender and racial politics. Its use in this photo shoot is regrettable as it took the artwork totally out of its intended context, particularly given that Buro 24/7's release of the article coincided with the important celebration of the life and legacy of Rev. Dr. Martin Luther King, Jr.

I regret allowing an artwork with such charged meaning to be used in this context. I utterly abhor racism and would like to apologize to those offended by my participation in this shoot.

Garage Magazine has a strong track record of promoting diversity and racial and gender equality in the worlds of art and fashion, and will continue in our mission to stir positive debate on these and other issues.