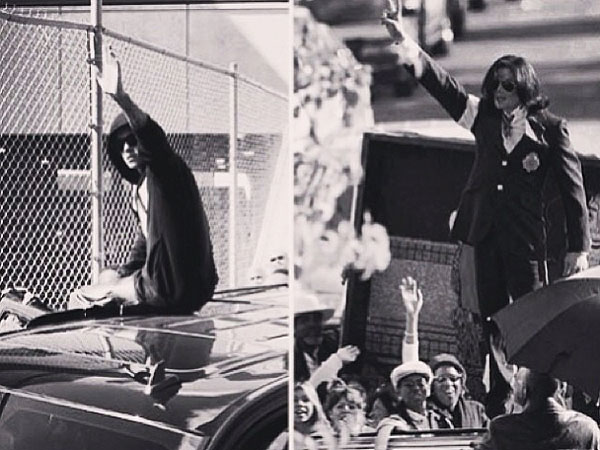 Leaving jail and having to face his fans doesn’t seem to be fazing Justin Bieber. In fact, he apparently thinks the incident puts him up there next to Michael Jackson.

After people took a photo of the hoodie-clad Bieber waving to fans from the top of an SUV outside a Florida correctional facility, he downloaded the image and posted it on Instagram --- next to a similar pose of the King of Pop during his child molestation case.

Bieber’s only words with the posting: “What more can they say?”

It was his first commentary on the experience of being arrested by Miami police who said he had been drag-racing a yellow Lamborghini. Authorities said Bieber admitting he had been drinking beer, smoking marijuana and taking prescription medication. They charged him with DUI, driving with an expired license and resisting arrest without violence.

The photo he posted of Jackson came from 2004, when the late singer climbed on top of an SUV to wave to crowds waiting for him outside a courtroom. Jackson was found not guilty of child molestation.

Sources say Bieber’s manager has encouraged him to get addiction treatment, but he refused.