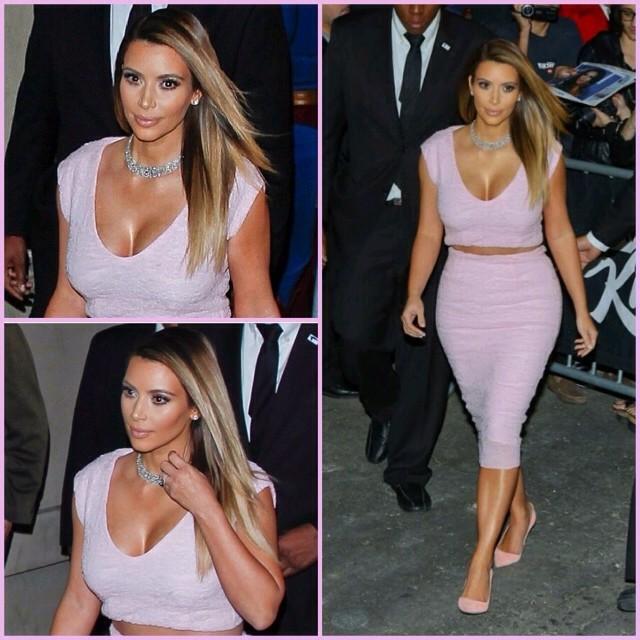 Reality star/model Kim Kardashian looked pretty in pink during a recent appearance on the "Jimmy Kimmel Show." And her midriff-revealing outfit was a one of kind that she had fashioned out of a Dior dress that was chopped in half to create a crop top and matching skirt. Kardashian shared her ensemble with fans by posting a picture of it on Instagram, noting that she was wearing high-heeled Manolo Blanick shoes along with jewelry by Lorraine Schwartz to complement the redesigned Dior dress.

Audience members noticed, however, that the two-piece ensemble didn't fit as well as the entire dress, with Kardashian readjusting her top and bottom at one point during her conversation with Kimmel. The two talked about Kardashian's upcoming wedding plans with fiancé Kanye West, which Kim revealed is most likely to be a summer nuptials ceremony in Paris. She says that West is fully participating in the wedding plans, so she feels much less pressure on her shoulders. He has already announced that he will attend to arranging for music at the event, while Kardashian worries about planning where each wedding guest will be seated. Kardashian admits she loves that her man demonstrates both passion and confidence.

How much are they worth? tommy iommi net worth in 2013 is 75 million