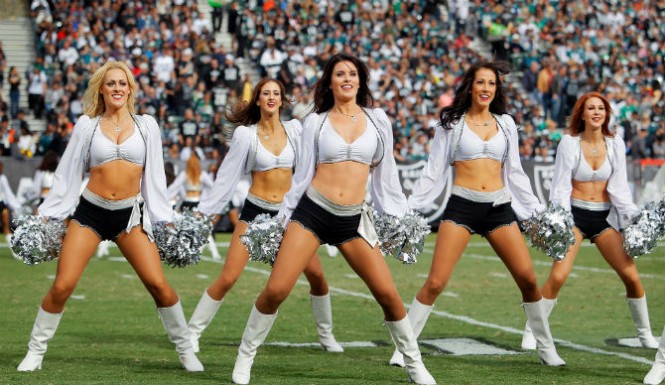 Oakland raiders cheerleaders sue over wages, has to buy own tights[/caption]Cheerleaders Sue Raiders Over Unfair Pay

The performances given by the Oakland Raiders cheerleaders, known as the "Raiderettes", is a highlight of every game, but their smiling faces have been masking a deep source of dissatisfaction. So now the Raiders cheerleading squad has hired legal counsel and is suing the NFL team, claiming their payment practices are illegal. Although each member of the cheerleading squad must make an average of 300 appearances throughout the football season, they are paid only a total of $1250, making their hourly wage less than the minimum wage.

The lead plaintiff, Lacy T. (identified only by her first name for security reasons.) said:

“The club controls our hairstyle and makeup, and we have to foot the bill,” “We also have to pay the costs for traveling to all kinds of events, including photo shoots… I love the Raiders and I love being a Raiderette, but someone has to stand up for all of the women of the NFL who work so hard for the fans and the teams.”

Even former cheerleaders have joined in the lawsuit, claiming unfair employment practices as well as wage theft.

The lawsuit charges that team management does not pay the cheerleading squad until the end of the season, shorts them on the amount of hours they work and requires them to foot the bill for many of the expenses they incur in the course of being a Raiderette. In addition, the cheerleaders are not compensated for the time they spending rehearsing routines or for travel time, to and from each game.

Management of the Alameda, California-based team, which had a very poor 4-13 record for the 2013 season, had no comment regarding the legal action.

How much are they worth? tommy iommi net worth in 2013 is 75 million