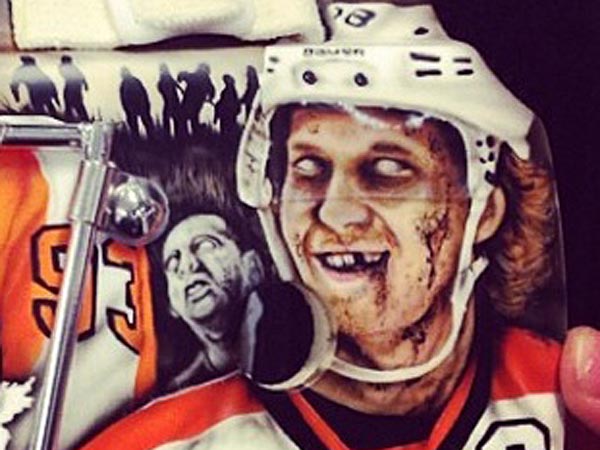 Steve Mason's New Zombie Helmet Inspires Team
[/caption]Canadian Steve Mason, goaltender for the Philadelphia Flyers, is getting lots of attention for the Zombie motif depicted on his helmet. It turns out that the 25-year-old from Oakville, Ontario, is an avid fan of the horror genre of flesh eating undead. It's a move that has proven itself popular not only with Flyers' fans, but also teammates.

Now, the team has special Zombie-themed goalie masks which will be worn by Jakub Voracek, Scott Hartnell, and Wayne Simmonds. Truth be told, they're wearing the masks at the behest of Mason, but they have willingly obliged their teammate. His pitch to his teammates went along the lines of asking them if they would like to be made into Zombies. He also explained that in wearing the masks, they'd got a lot more media attention than is customary as they would look better as Zombies than they do in real life.

"I thought of a couple guys to put on there, some of the guys I'll hang around with away from the rink more often," Mason said. "I asked for their permission. I didn't want to make them a zombie without their permission, but I'm sure they're pumped to see the final product."

It probably helped matters greatly that Mason is very popular among the fans. So while he may have viewed himself as recruiting more teammates into his Zombie-meme, they perceived it as him sharing "the love" of his fan base with them. At least that is how Claude Giroux, the artist behind the Zombie motifs, viewed the new masks.

The mask was created by Franny Drummond, who runs PaintZoo, who worked with Mason on the theme:

"He said, 'I want horror, but without a horror movie,' " Drummond told NHL.com. "He [Mason] said, ‘why don't we do Ben Franklin as a zombie,’ [and] I said, ‘I guess we could do it.’ I said I'll do sketches, over the summer we'll go back and forth over design work, and this is basically what I came up with. Betsy Ross, any historical figures, and taking it and making it into a zombie apocalypse that hit Philadelphia in 1776."
… "We have the logo, and it's going to be like she [Ross] stitched it to the mask," Drummond said. "Ben Franklin, him with the key, he's kind of giving the key to the city. Just weird stuff. He loves stitches. We're going to keep that feel.