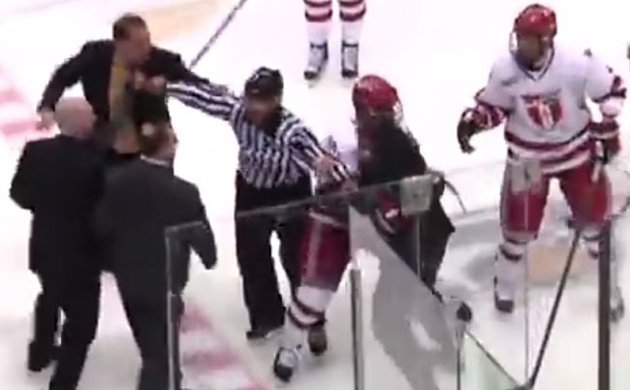 Hockey fans at the Times Union Center in Albany, NY, got more action than they bargained for when they attended Saturday's Mayor Cup game. When Rensselaer Polytechnic Institute beat opponent, no. 3 ranked Union, team members from both college teams began fighting on the ice. As soon as the clock ran out, RPI players began streaming onto the rink and emotions between the rival college teams began boiling over, so much so that Union Coach Rick Bennett began brawling with RPI coach Seth Appert.

Local sports news media called the incident "an embarrassment" not only for the team players and their coaches but for their fans as well. It wasn't until a referee was able to separate Bennett from Appert that the fighting had any chance of dying down. As a result of the melee, two players from each of the teams have been issued a suspension from future play, and a total of 125 penalty minutes have been assessed. Each of the coaches apologized profusely during the press conferences they conducted after order was restored. The feedback from attendees seemed to indicate that both coaches were sincerely sorry that they let their emotions get the better of them. beyonce drunk in love performance at The Grammy’s