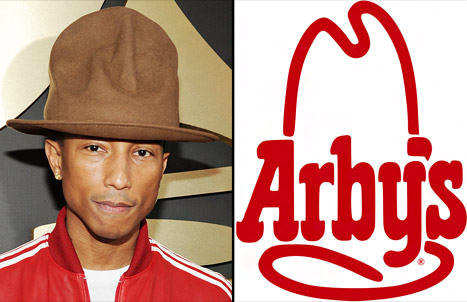 Another Grammy Awards show has come and gone and this year's big winner was Pharrell Williams and rapper Daft Punk. However, Williams was a big draw not only for winning the prestigious "Record of the Year" and "Best Pop Duo/Group Performance" awards, but also for his large cowboy hat.

His typical hat is a large red hat, but at one point during the awards ceremony, he appeared sporting a large brown topper reminiscent of the large brown hat that is the logo to fast food chain Arby's.

It was a comparison that did not go unnoticed by the roast beef restaurant which tweeted the rapper requesting that their hat be returned to them.

"Hey @Pharrell, can we have our hat back," the officially Arby's Twitter account posted during the show.

In the spirit of the occasion, he tweeted back to them if they were attempting to initiate a "roast beef" with him.

He draw as many guffaws as a standup comedian for the outlandishly oversized hats which tend to dwarf the size his head. He also wore a "Smokey the Bear" hat when sitting next to legendary Motown singer Smokey Robinson. The evening turned out to be his as the youthful looking 40-year-old singer/producer added yet more Grammy awards to his list of accolades.