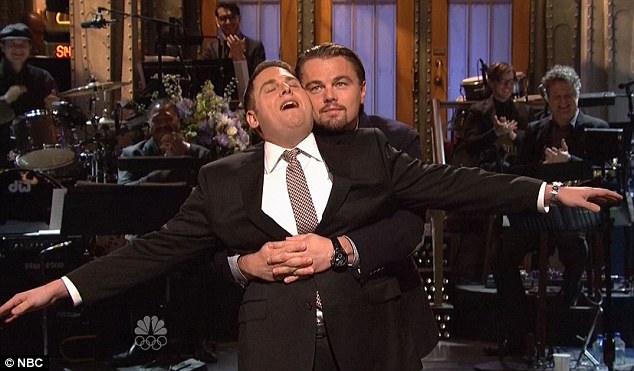 Saturday's episode of "Saturday Night Live" proved to be great publicity for the Oscar-nominated film, "The Wolf of Wall Street." Oscar nominee Jonah Hill started to deliver the night's opening monologue, graciously answering questions about his co-star, Leonardo DiCaprio, insisting that the film's director, Martin Scorsese, really needed an experienced actor of Hill's caliber rather than teen heartthrob DiCaprio, who he characterized as a "movie star" rather than a "real actor."

The audience went crazy when DiCaprio in the flesh appeared on stage, pretending to be annoyed with Hill and asking him exactly what was going on. Then DiCaprio took advantage of the occasion to give Hill some advice about not letting fame give him a big head and tips for remaining humble despite being in the glare of Hollywood's spotlight. Then the duo got the biggest laughs of the evening when Hill spread out his arms and assumed the role of Kate Winslet in the Oscar-winning film, "Titanic", and DiCaprio took a position behind him, re-enacting his famous on-deck scene from the film. DiCaprio sweetly caressed Hill's cheek as he assured him he was flying, supported by Celine Dion's singing of the film's iconic song, "My Heart Will Go On."

On The Web
http://www.eonline.com/news/503547/leonardo-dicaprio-crashes-jonah-hill-s-snl-monologue-duo-reenact-iconic-titanic-flying-scene
Related Topics:
Up Next