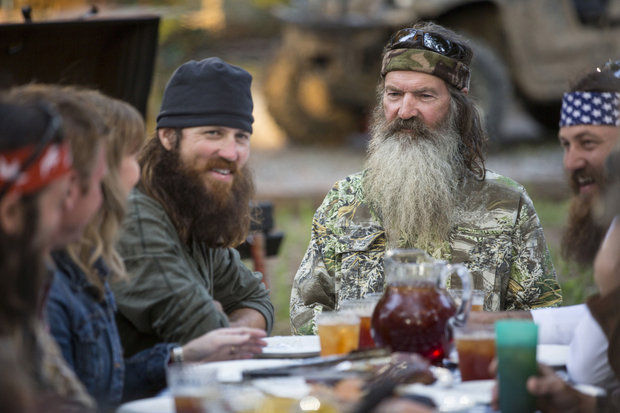 This undated image released by A&E shows Phil Robertson, flanked by his sons Jase Robertson, left, and Willie Robertson from the popular series "Duck Dynasty." Willie Roberston will be Rep. Vance McAllister's guests at Tuesday night's (January 28) State of the Union speech. (AP Photo/A&E, Zach Dilgard)
[/caption]Duck Dynasty's William Robertson Invited to State of the Union
Washington D.C. - William Robertson of the redneck clan from the famous A&E reality TV series "Duck Dynasty" was invited to the 2014 Presidential State of the Union address. No, he wasn't invited by President Obama. That would have been a real eye opener given that one of the president's core base of supports are LGBT vote. Rather, he was invited by GOP congressman Vance McAllister of Louisiana.

McAllister was proud to announce the invitation of someone he considers both a close friend and constituent. For his part, Robertson was flattered by the invitation and graciously accepted. Congressman McAllister represents the congressional 5th district of Louisiana. He said that Robertson's invitation was also to represent small businesses and add diversity to the audience. The latter comment is a jab at the White House which is largely considered as having written off the male white vote in favor of a coalition of single white females and other minorities.

Congressman McAllister owes his seat in part of the efforts Robertson made by campaigning for him. He was able to score an upset against a mainstream GOP incumbent just this past November in a runoff election. It will be interesting to see what Robertson thought of the president's address.

On The Web:
Rep. McAllister invites Willie Robertson of Duck Dynasty to watch State of the Union speech from House gallery
http://www.nola.com/politics/index.ssf/2014/01/rep_mcallister_invites_willie.html