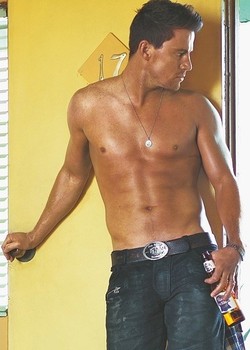 Channing Tatum has packed on some weight as of late, but he's not worried about it in the least. He attributes the increase in weight due to the increased attention he's devoted to his newborn daughter Everly born this past May. Yes, he has a little princess and that is enough to captivate the attention of any loving father.

It makes sense on a whole range of levels because devotion to six-pack abs takes a lot of effort into one's own appearance. While there's nothing wrong with that per se, his attention is on his wife and daughter. Anyone who's seen Tatum with his family knows how deeply in love he is with them.

While on the set of the Ellen DeGeneres show, he admitted he no longer has the abs he had as the character Magic Mike.

In the past, he admitted he likes to sport a hard body, but if he doesn't keep at it he can get doughy.

'I like to be lean. If I get too bulky I can’t move well and I like to move. When I’m not training, I get really round and soft,' the former Sexiest Man Alive told People Magazine in 2012.

When asked by GQ magazine about his work out regime, Tatum said: 'Truthfully, this is how I approach my work out: I want to be the best athlete I can possibly be.'

'If I can out-perform some of the better athletes then I'm happy. When I look at the NFL or the NBA, these guys look how I want to look - it's usable, functional muscle.'

At any rate, the weight increase may be short lived as he will be preparing for his role in the sequel of "21 Jump Street". In the past he was voted People Magazine's sexiest man alive.

Tatum is no stranger to work-related physical transformations. For the 2009 movie "Fighting" (in which he played a street fighter), Tatum did a combination of high-intensity circuit workouts and weight training and followed a low-fat, high-protein diet. Channing followed a similar routine to play a super-soldier in the action flick "G.I. Joe: The Rise of Cobra."

Despite having posed shirtless and nude in past films and modeling gigs, Tatum insists he never really enjoyed getting naked for money. “I never enjoyed the taking-the-clothes-off part,” he recalls.

“You are on a stage with people yelling at you, and you feel you’re a rock star, but you’re nothing. You’re just a guy taking off his clothes, looking like a fool in a stupid outfit.”

German Doctors Turn to Dr. Gregory House to Save A Man’s Life