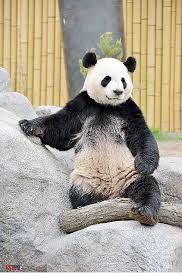 With the Toronto Zoo closed to visitors on Wednesday Feb 5th because of a snowstorm the resident Giant Panda took advantage of the peace and quiet to engage in a little playtime. Da Mao, a five year old Giant Panda appeared to enjoy his time in this years first major Toronto snow event as he played like a small child.

Toronto Zoo Curator Maria Franke claimed the zoo's staff were not shocked by the fast moving and playful nature of the panda in the snow. She stated the animal is known for playing up to different situations with a fearless nature, leading her to joke that Da Mao could eventually have a career in the Olympic luge event.

Security cameras at Toronto Zoo first spotted the Giant Panda throwing himself around in the snow as he enjoyed a little time outside his indoor enclosure.

The video, which has now gone viral on the Internet, shows the panda climbing to the top of a small ridge before throwing himself over the edge to slide down a snow covered slope. Midway through the slide Da Mao pauses and seems to consider his actions, before resuming his slide to the bottom of the slope.