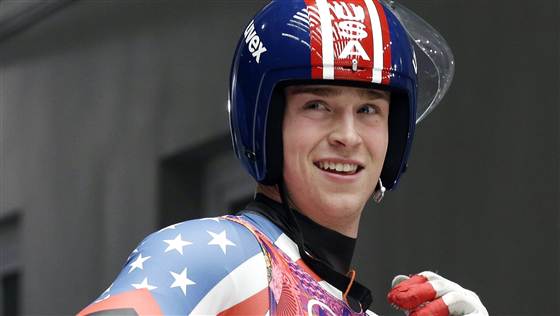 Awkward! Brett West Tries To Get His Son Date[/caption]Olympic Luger's Dad Tries to Hook Him Up

Sochi, Russia - David West is the father of 18-year-old Olympian Tucker West of US luge team. The team didn't fare so well in the Olympics this time around, but that doesn't mean there might not be an enduring benefit to the competition. It turns out that Mr. West has ulterior motives aimed at a benefit far more enduring that any Olympic prize. He is looking to find a nice girl for his son.

Speaker before camera on one of the world's most closely watched events, Mr. Tucker declared that his son is an eligible bachelor.

West told TODAY's Lester Holt that his son was “a little shy” and, "to all the young ladies out there, Tucker is very single.”

Now, generally speaking such declarations are prone to evoke in a child that involuntary reddening of the face known as blushing. In a sign that Mr. West is up with current trends in societal evolution, he informed interested ladies that they would have to initiate a potential relationship via his son's Facebook page.

“And the neat part is he’s such a good kid, anyone who posts there he always gives back a personal response,” Brett said Mr. West also has the good sense to admit that his actions are unilateral and that he is likely going to hear about it from his son. Regardless, Tucker can't be too put off with his father. Worrying about a child meeting the right person is the concern of all caring parents.

So, all the single ladies, per dad's instructions, check out Tucker's Facebook page or his Twitter @TuckerWest1.

Better act fast, Tucker's Facebook is already flooded with dating prospects, including one who writes: "I turn 18 next month and I'm 'very single' too ;)."