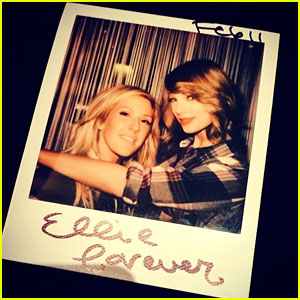 Taylor Swift, the 24-year-old singing sensation, proved once again that there really isn't anything she can do fashionable that is anything but lovely. In a selfie she posted yesterday, the entertainer from Reading, Pennsylvania, showed off her girl-next-door charm and exceeding beauty. She got the new haircut in London during some downtime she had backstage at a concert. Her friends Ellie Goulding and Cara Delevingne were on hand to watch her long locks get removed and remaining get styled into a new bob that extends to her shoulders.

The singer of classics such as "You Belong with Me" and "Love Song" made a short video of the experience. From the footage, it was clear that she wasn't exaggerating when she exclaimed that her hair cut turned into a party. The singer was surrounded by people fascinated with her getting her hair cut. However, in all honesty, throngs of people attend her wherever she goes.

Apparently, the hair style was inspired in part by the passing away of Hollywood Golden Era icon Shirley Temple who passed away Monday at the age of 85. Reports are that the actress dies peacefully from natural causes. Swift's new hairdo was her take from Shirley Temple's "Goodship Lollipop" scene from the 1934 film "Bright Eyes".