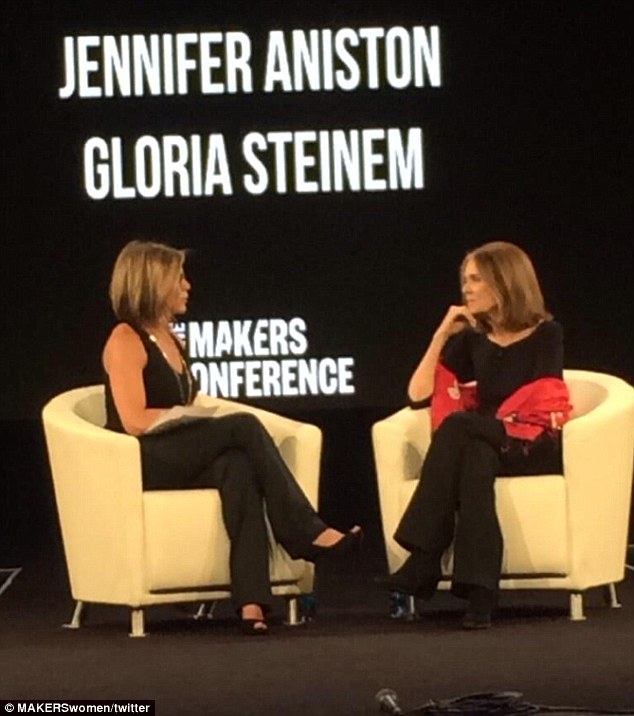 Short hair don't care: Jennifer Aniston ditched her hair extensions and showed off her bob during a talk with Gloria Steinem in LA on Monday[/caption]Aniston Bob Back


Jennifer Aniston is showing off her chic bob hairstyle once again.

The star chopped her hair short in November, saying she was ready for a change and liked to cut off old, damaged hair once in a while to give herself a fresh makeover. “It’s fun to change it up once in awhile,” she explained.

However, she was soon back in the beauty salon and spent five hours having extensions put in. She emerged with long locks once again. Sources said she felt her haircut had made her look too old.

Now, she’s returned to the shorter look. On Monday, she appeared with feminist activist Gloria Steinem to talk about women’s issues at a conference in Los Angeles, and she showed up with her neat bob style, extension-free.

Aniston, who just celebrated her 45th birthday, has had fun switching up her hairstyles ever since her days on the popular “Friends” television show and celebrity watchers have enjoyed keeping up with her changing look.

“Jennifer Aniston Ditches Her Hair Extensions After Only a Week,” E! Online: http://www.eonline.com/news/509707/jennifer-aniston-ditches-her-hair-extensions-after-only-a-week-see-the-pic