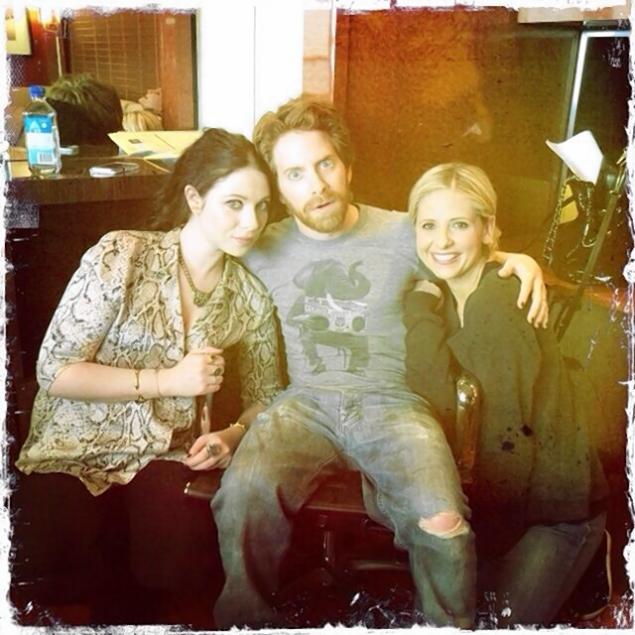 Actress Sarah Michelle Gellar enjoyed a surprise reunion with two of her Buffy the Vampire Slayer co-stars recently on the set of her current show, "The Crazy Ones." Gellar was so excited to welcome Michelle Trachtenberg and Seth Green that she sent out a photo of the smiling trio via social media. Geller tweeted to her Twitter followers that she manages to get "the best visitors" on the set of her successful new comedy show.

Fans went crazy after seeing their favorite characters of Buffy, Oz and Dawn together again, more than 10 years after the epic Vampire series had its finale performance. Several fans said it made them realize that they miss Buffy and her fellow vampire slayers now more than ever and the picture that Gellar tweeted made them want to start watching old episodes from the series all over again. There was no word from Geller about what the trio of old Buffy friends chatted about or if they are considering doing a real Vampire Slayer cast reunion or reunion movie in the near future. But judging from the wide grin on Geller's face, she would certainly be amenable to working with Green and Trachtenberg again.

On The Web:
Sarah Michelle Gellar shares photo of mini-‘Buffy the Vampire Slayer’ reunion after former co-stars visit her on ‘Crazy Ones’ set
http://www.nydailynews.com/entertainment/tv-movies/sarah-michelle-gellar-shares-photo-buffy-reunion-crazy-set-article-1.1614981

Related Topics:buffy the vampire slayer reunion
Up Next