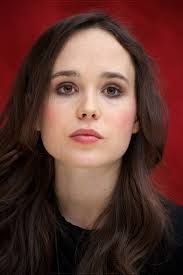 Saying she was tired of hiding, "Juno" star Ellen Page, 26, came out on Friday, Feb. 14, St. Valentine's Day, at the Time to THRIVE event in Las Vegas. It's a conference for educators and counselors who work with LGBTQ youth. Page told the approving crowd she was at the conference because she was gay and tired of lying by omission.

Page's admission was greeted with two boisterous standing ovations by the audience. Saying she wanted to make a difference, Page noted she felt a social responsibility and personal obligation to come out because she was an actress with a following. On its website, the Human Rights Campaign that sponsored the Las Vegas conference congratulated the actress for her brave decision to live authentically and openly.

Page said she suffered for years because she feared being outed. This caused her mental and physical health to be affected. She addressed the audience for a little less than 10 minutes.

Tears were observed in Page's eyes as she told the audience at Bally's Las Vegas she was hurt by gossip and speculation about her sexuality with websites running stories on her mannish clothes and why she wore sweatpants going to the gym.