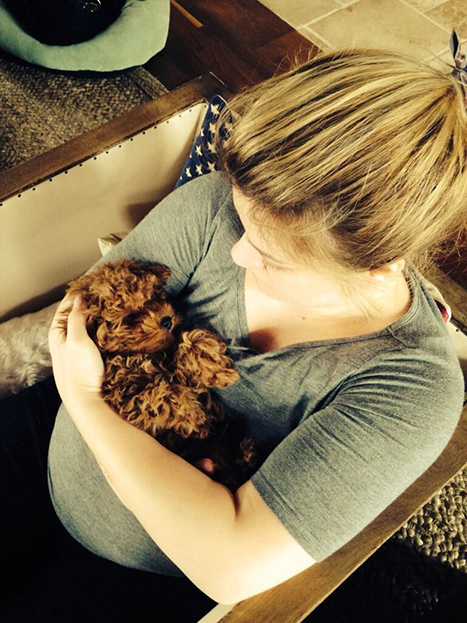 Singer Kelly Clarkson expanded her family this Valentine's Day. Her baby isn’t due for a while yet, but the pregnant entertainer got a puppy to "love up" on. She tweeted a picture of the little fur ball which is so hairy as to resemble a teddy bear when warmly tucked in her arms. The dog replaces her beloved pet Joplin that passed away late last year. Despite only having had the dog for 2.5 years, she had grown very attached to it.

At the time of Joplin's passing, Clarkson confessed the dog had been her best friend. Now, she is thrilled to have a new puppy but admits he'll never replace Joplin. Not long afterwards, she tweeted another picture cuddling the puppy which she said seemed to enjoy being held in a fetal-like position. She also mused that with her looming delivery, cuddling the puppy was a practice run for motherhood. The dog is named Wyatt.

Clarkson is a step-mother to her husband Brandon Blackstock's two children from a prior marriage. The children's names are Seth and Savannah. By all accounts, she enjoys her new family and said her step-children are wonderful. Clarkson is truly a class act. Related Topics:Kelly Clarkson Puppy
Up Next