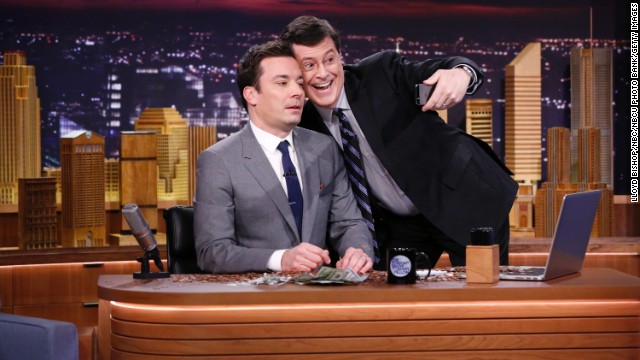 The talented Jimmy Fallon confidently took the stage to take over the reins from Jay Leno in one of the most popular talk show franchises in history. The show has appeared on NBC airwaves for 60 years and the hosts role was famously filled by the likes of Johnny Carson, Steve Allen, Jack Parr, Conan O'Brien, Jay Leno and now Jimmy Fallon.

Fallon officially took the reigns from the departed Leno on February 17th and his first broadcast was as star studded as you may expect. The first celebrities to be introduced was Fallon's house band, the Roots. The band that was such a big part of his previous late night show joined him in the 11:30 time slot much to the delight of viewers. After a quick introduction of himself to the new late night audience, Fallon dazzled viewers with a celebrity hot list of guests. He had guests such as Will Smith and the legendary rock band U2. Not to be limited with star power he also had celebrity cameos on that first episode from notable personalities such as Kim Kardashian, Mike Tyson, Lady Gaga and Stephen Colbert.

Now that he is in the coveted Tonight Show seat you can be certain that Fallon will continue to draw star guests to his interview desk. Just this week he'll have Jerry Seinfeld and Michelle Obama join him as guests. It remains to be seen if Fallon will be able to keep up this momentum and win his head to head battle with CBS' Jimmy Kimmel, but it will be fun to watch him try.

Related Topics:Jimmy Fallontonight show
Up Next