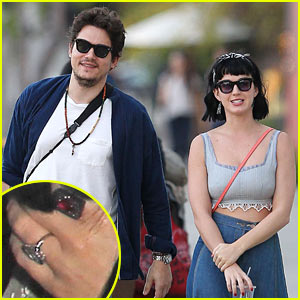 On February 16, 2014 Katy Perry and John Mayer went to dinner at a Los Angeles restaurant called Crossroads. While at dinner she was wearing a ring on her ring finger. Perry's face was glowing like the diamond ring on her finger, so it is possible the couple is heading for matrimony.

Engagement rumors for the couple have surfaced before. Last year, Perry wore a red ruby ring on her left hand that left people wondering. So is she or isn't she engaged?

Currently, it has not been confirmed whether Mayer has asked her to marry him or not. While the couple has had their share of ups and downs, they seem very happy. The couple appeared for their first interview on-air in December to talk about their new song "Who You Love."

The pair will be releasing their 'Love' Portrait and have been working on a video together. Mayer acknowledges that sometimes the only way to see a superstar like Perry is to work with her. Additionally, Mayer announced on "CBS Sunday Morning" that he does eventually intend on getting married. He said that he is from Connecticut and that is just what people do there.

On The Web:
Katy Perry Sports a Ring on Her Left Hand

Related Topics:katy perry ring
Up Next