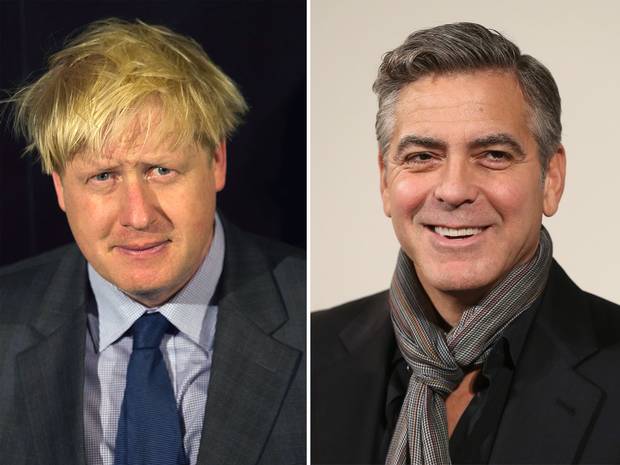 London, England - Mayor Boris Johnson's comments that actor-director George Clooney has some proverbial marbles loose in his head over comments he made that the British should return Greek Elgin Marble back to Greece didn't sit well with Clooney. The star of the new film "The Monument Men" made it clear he did bears the popular mayor no grudges. However, he did admit that he didn't like the mayor's line of reasoning when he openly asked Clooney if he believed the Nazis would have returned the Elgin Marble to Greece had they conquered Great Britain.

"I'm a great fan of the Mayor, and I'm sure my right honorable friend had no real intention of comparing me to Hitler," Clooney said in a statement to the Huffington Post UK.

"I'd chalk it up to a little too much hyperbole washed down with a few whiskeys. I've found myself in the same spot a time or two so I hold no ill will.

Clooney then said that all hyperbole aside, the UNESCO accords signed onto by Great Britain prevent an occupying power from confiscating or selling the national treasures of the nation it occupies. He points out that the Parthenon marble was dismantled by the Turks and sold off to various nations. He also cited the fact that the British public supports returning the prized marble back to Greece. Clooney has made a good case for the return of the marble.

On The Web:
George Clooney hits back at Boris Johnson Hitler comparison: ‘Too much hyperbole washed down with a few whiskeys’
http://www.independent.co.uk/news/people/news/george-clooney-strikes-back-at-boris-johnson-hitler-comparison-too-much-hyperbole-washed-down-with-a-few-whiskeys-9133154.html

Related Topics:George Clooney
Up Next