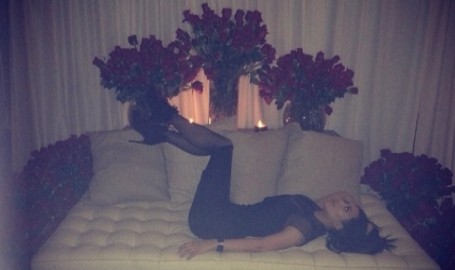 Kim posted a photo of herself on Instagram lying on a couch with a black dress and stiletto heels surrounded by her many red rose bouquets. However, that was not the end of her V-Day surprises. She took a romantic backstage cruise with Kayne on a golf cart during his concert in Baltimore.

This is not the first time that Kayne has spoiled his lovely wife-to-be. In fact, on her 33rd birthday in October of 2013, he proposed to her at AT&T Park in San Francisco. The proposal was complete with huge scoreboard proposal, live orchestra and incredible diamond ring from Lorraine Schwartz.

Kim Kardashian, 33, is a TV personality, model and fashion designer while Kayne West, 36, is a rapper, fashion designer, record producer, entrepreneur, songwriter and film director. Kim and Kayne began dating in April of 2012. Their wedding is set for the summer of 2014, mostly likely to be held in Paris, France at Versailles Palace.

Related Topics:kim kardashian roses
Up Next