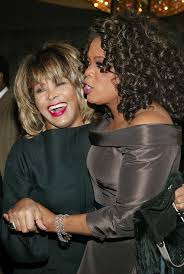 Zurich, Switzerland - Reports that 74-year-old Tina Turner suffered a life threatening stroke while at her home in this North Central Swiss metropolis of 400,000 people are exaggerations. Oprah Winfrey, a good friend to the 5'4" iconic singer still known for having a great set of legs, said that Turner had a case of the flu and she's recovered. Winfrey said her friend took ill weeks ago, but has since resumed her normal live life to the fullest activities.

Winfrey herself had been shopping in this wealthy beacon of Central Europe and encountered some provincial if not racist attitudes from a handbag boutique. Winfrey explained that upon asking to see a particular handbag she was denied because the attendant believed she could not afford it. Little did the attendant realize she was speaking to one of the wealthiest media moguls in the world. The bag in question was $38,000 which is more than Winfrey was willing to pay, but that was likely owing to not wanting to reward the attendant after the ignorant treatment she had received.

Turner herself was born in the Deep South of rural Tennessee, but has since become a Swiss citizen. She is also a converted Buddhist.