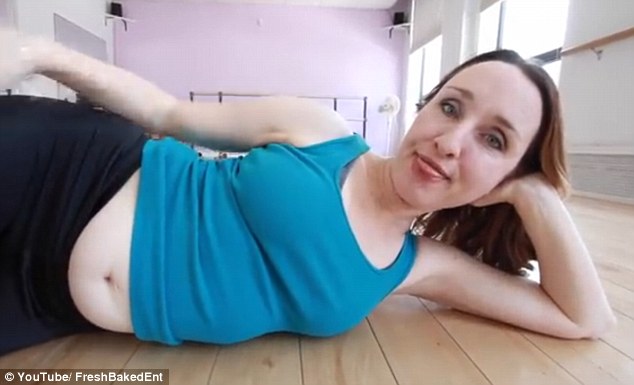 Body confidence: In the two-minute-25-second long film the stand-up comedienne from Toronto, proudly puts her stomach on show [/caption]Mother-of-Two Raps While She Bounces Her Chunked Out Muffin Top

Toronto, Ontario - Erin Keaney is a mother of two children and at age 43 still carries a fair bit of her pregnancy weight.

In some respects, she looks as if she is still with child, but she says she doesn't care and is letting her freak flag fly - literally. In a short video she filmed herself dancing to a rap song about what she calls is her muffin top. She even puts the elastic stomach on full display.

She claims she's had enough of celebrities who have lost all of their pregnancy weight and returned to the stellar figures they had before child bearing. What this comedienne seeks is a voice of acceptance for the millions of other women whose bodies are fundamentally altered from child bearing. Getting into the groove: She brazenly chants lyrics such as 'bounce, carbohydrate, bounce'[/caption]

As for her two daughters, she wants them to understand that she is accepting of her body and is focused on health and balance. Her video has been watched more than 61,000 and many viewers complement her for promoting body acceptance. Kearney urges fellow mothers to embrace themselves as they are and not heed the parade of voices telling them they are not good enough for having put on extra weight.

Jake Gyllenhaal, ex-girlfriend Give It Another Go