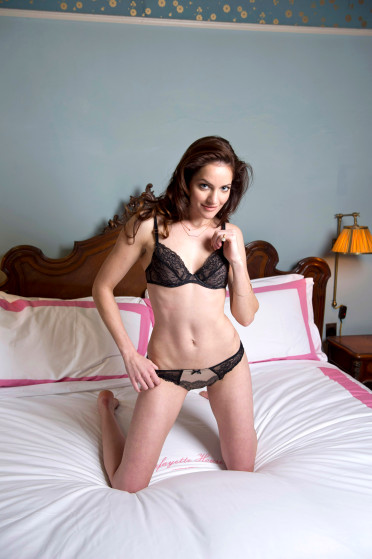 Reality TV actress and model Kate Stoltzfus, age 23, has long since turned her back on her Amish roots. TV viewers first saw her on the reality TV show "Breaking Amish" and its follow up "Breaking Amish: Brave New World". She is now making headlines for accepting a model job to display alluring bras and panties. Many people still remember her for her raw beauty so as to illicit no lust. After all, she wore the trademark white bonnet and simple blue cotton dress.

However, Stoltzfus or Stoltz or for short, didn't exactly toss off her Amish clothes for the sexy underwear in one abrupt move. She had long since abandoned her Amish heritage in favor of a worldlier lifestyle. Before taking up modeling, she even got arrested for a DUI. As a catalog model, she has stunning beauty with her deep set clear blue eyes, dark hair, and naturally toned cheeks. Her lingerie spread appeared in the New York Post.

She's been going through lots of changes as of late in her evolution away from Amish culture. She admits that she would not have felt at ease doing her recent photo spread only 12 months ago. She maintains ties with her family but admits she does so as an outsider. Katy Perry booed Off The Catwalk In Milan