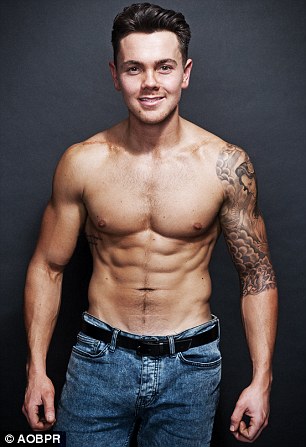 Fans of "Dancing on Ice" have been amazed to see the transformation of contestant Ray Quinn. The British actor/singer/dancer has been undergoing an intensive weight loss and body shaping program and the results are impressive. Not only has Quinn lost two stone in weight over an 8-week period, he has also managed to trim his total body fat down from 20 percent to 8 percent. The 25-year old film star had been used to chowing down on large portions of specialties delivered by Chinese restaurants, accompanied by several cans of beer per meal. But he's traded in his unhealthy eating habits for a regimen that has resulted in a super ripped physique.

Quinn is following the Caveman Diet, one that focuses on consuming plenty of fresh vegetables and proteins while eliminating all potatoes, breads and pastas from his daily menus. Pictures of Quinn taken before and after his transformation show a fleshy Quinn poolside, holding several glasses of caloric beverages, compared to his current frame which outlines killer abs and not once extra ounce of fat. Quinn admits that he knew he had to clean up his nutritional act and get in shape to complete on the show.

on the web:
Ray Quinn Gets Ripped For New Show
http://www.dailymail.co.uk/femail/article-2565946/Super-ripped-Ray-Quinn-loses-two-stone-two-months-carb-tapering-Caveman-diet-FIVE-work-outs-week.html

Katy Perry booed Off The Catwalk In Milan

Sofia Vergara Monokini: Star Struts Her Stuff Down Under