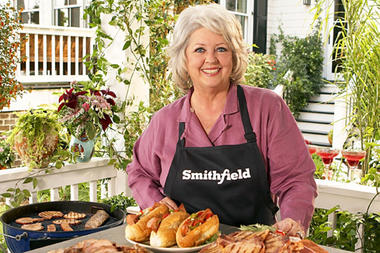 Paula Deen Compares Herself to Michael Sam on Comeback Tour
[/caption]The comeback trail for disgraced celebrity chef, Paula Deen seems to have become a little harder to travel after some startling remarks made in an interview with People Magazine. During the bizarre interview, the chef who was forced to remove herself from the public eye because of racist comments made in her past, compared herself to gay NFL prospect Michael Sam.

Deen's interview with People, which was designed to aid the relaunch of Deen's career, sees the chef state her admitted use of a racial slur made her feel "like that black football player who recently came out." Former University of Missouri football star Michael Sam opened up to the worlds media about his sexuality in February 2014 as he prepared to enter the NFL scouting combine.

Deen's admitted use of a racial slur saw her removed from TV shows across the US, with her lucrative book and cookware lines taken from the shelves of high profile stores around the world. With the launch of a new business, Paul Deen Ventures, and a planned new cookbook and TV show, the Southern chef was hoping to relaunch her career almost two years after the racism scandal erupted. The latest interview may make her path to redemption a little harder to complete.