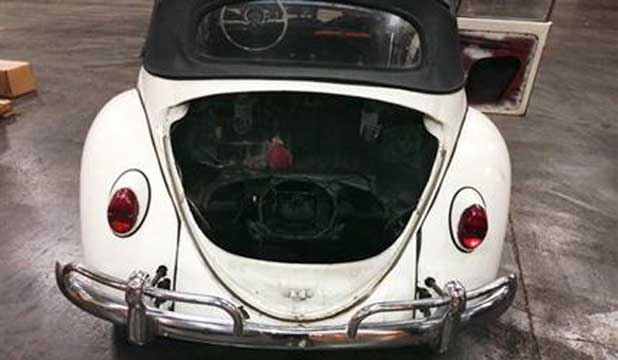 S Customs and Border Protection
BEETLING AROUND: The 1965 Volkswagen Beetle that was stolen 40 years ago in Tennessee after it was recovered in Detroit.[/caption]Stolen VW Convertible Found After 40 Years

Joseph MacDonald of Tennessee doesn't have to miss his 1965 Volkswagon Convertible Beetle any more. Although it was stolen in 1974 while MacDonald was enjoying a dinner out with several of his friends, the car has miraculously resurfaced some 40 years after the theft, in Detroit. MacDonald got lucky when federal agents were reviewing necessary paperwork in order to have the car shipped from its current owner to a location overseas so that restoration work could be done. Agents discovered the vehicle, originally red but now painted white, was on a list of stolen cars, which came as a complete surprise to the VW's current owner who lives in Michigan.

Although officials could not initially locate MacDonald, listed as the car's owner, because he had moved and changed phone numbers, when he saw news reports of a stolen car found after 40 years, MacDonald was able to produce the original title for the VW bug which he purchased while a student at the University of Tennessee. He admits that he had always hoped to be reunited with his stolen vehicle, but police officials in Knoxville say he will have to present them with an authentic title to claim it.