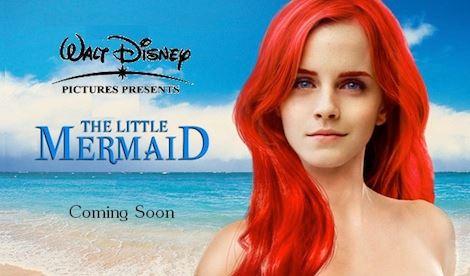 f you thought Emma Watson really was going to be cast in a live-action remake of The Little Mermaid, relax. While the bogus posters showing Watson as The Little Mermaid may have looked convincing, they weren't portents of a Disney picture coming soon. They were hoaxes. Not only that, but the hoax is of the long con variety as it dates back to last year.

A Harry Potter fan page last April made up the rumor as an April Fools prank. The joke was all over the Internet for a few days. Besides Watson's alleged casting in the classic, Daniel Radcliffe, who played Potter, was rumored co-star as Prince Eric.

Watson may not be appearing in The Little Mermaid, but she's hooking up with Disney on some other fronts, She's been cast in a remake of "Beauty of the Beast" with Guillermo del Toro. That project is expected to begin any day following a few production delays.

Watson also was rumored to be lead in a remake of Cinderella with Kenneth Branagh as director-producer. Her next project, however, is a re-imagination of Noah's Ark for the big screen. She stars along with Jennifer Connelly, Anthony Hopkins, Russell Crowe, and others.

On The Web:
Emma Watson Will NOT portray Ariel – Hoax
http://www.inquisitr.com/1152326/emma-watson-will-not-portray-ariel-hoax/