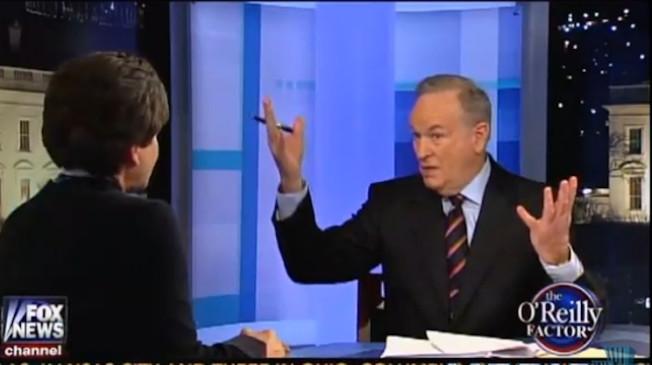 Bill O'Reilly Gangsta[/caption]Bill O'Reilly Calls on President Obama to Lead Effort to Reject Gangsta Music
The unemployment among young to middle age black men is approaching 60% and is the highest it has been since deep into the presidency of Jimmy Carter. Many in the Black community believed that with the advent of the nation's first Black president, the economic condition for many African-Americans would improve. While it certainly has for some, it has not for the majority and six years of the president's policies have only seen the figure steadily grow worse.

So it should not surprise anyone that President Obama would launch a new extra-congressional initiative to promote the hiring of minorities by businesses. The new initiative is called "My Brother's Keeper". By all accounts, the president gave an impassioned speech to kick start the program.

However, Fox News commentator Bill O'Reilly spoke with Sr. White House Advisor Valerie Jarrett to discuss the "gangsta culture" which critics charge is a factor in hindering the prosperity of minorities.

O'Reilly stated that President Obama should be doing more to lead the push to reject the drug and crime culture of modern day rap music collectively referred to as "gangsta" rap.

O'Reilly stated that President Obama should use his influence as president to make it undesirable to have out of wedlock children.

"You have to attack the fundamental disease if you want to cure it," O'Reilly told Jarrett. "Now, I submit to you that you're gonna have to get people like Jay Z, Kanye West, all these gangsta rappers, to knock it off.

"They idolize these guys with the hats on backwards, and the terrible rap lyrics and the drugs and all of that," he said, adding that other cultural figures -- including “athletes” and “tattoo guys” -- need to be better role models for at-risk youth than they are now.

Jarrett sounded off at these accusations stating that young blacks are not lacking positive role models.

"What we showed today is that there is evidence that there are wonderful programs out there that can inspire these young people," Jarrett stated. "The president is a terrific role model. The room today was full of role models of these young boys can look up to. And what we have to do is take what's working and take it to scale."

However, one commentator noted that the problems of gangsta rap reflect ghetto life as opposed to create it. The problems are much deeper than superficial behavioral issues.

Based on his statements, it seems unlikely that O’Reilly has ever actually listened to Kanye West or Jay-Z. In fact, he doesn’t seem to know much about hip-hop at all. Gangsta rap isn’t just a catch-all term for hip-hop, as O’Reilly seems to use it. In fact, that sub-genre of hip-hop reached the height of its popularity in the ‘90s when artists like Ice Cube, the Notorious B.I.G. and Tupac Shakur rapped about drive-bys, drug dealing, and the harshness of life on the streets with gritty, if exaggerated, realism.

Watch the full segment below.

Related Topics:Bill O'Reilly Gangsta
Up Next