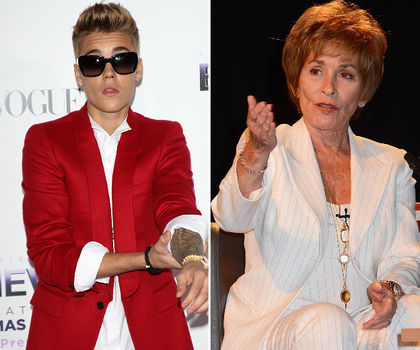 Judith Susan Sheindlin aka Judge Judy has never been one to withhold her opinion. The feisty 71-year-old retired justice has weighed on the Justin Bieber and to quote a famous line from the film "A Knight's Tale", she has essentially told the brash Canadian that he has "been weighed, measured, and found wanting". However, she had less flowery prose in her analysis when stating that no one is likely to remember him for his "marginal" singing capabilities. Rather, they'll remember him for his youthful follies and his effectiveness at using the rare gift of stardom to make a complete fool of himself. Ouch!

"Being a celebrity is a gift. You could either treat it reverently or you could make a fool out of yourself. And he's doing a very good job of making a fool out of himself."

"I think it's sad," she continues. "And nobody's going to remember that he was a marginal singer. But they're going to remember a young kid who had a chance to have it all and who is blowing it by acting like a fool."

Sadly, Judge Judy may have a point in criticizing Bieber as being a marginal singer. His latest song "Broken" offers up his recalcitrant attitude about addressing the criticisms leveled against him for his own bad behavior. It's long been known that the young many displays utter disregard at adult authority. He will openly unleash an unbridled tirade of profanity at anyone he deems as "dissing" him. His behavior has seemingly evolved past hurling spittle at people and to alleged vandalism, pot smoking, and DUI driving. If he doesn't get his life in order, he may well end up as Judge Judy mentioned. In her decades of work as a justice, she's seen enough people walk the path of delinquency his is on to know what she's talking about.

On The Web:
Justin Bieber Is 'Making a Fool Out of Himself,' Says Judge Judy
http://www.rollingstone.com/music/news/justin-bieber-is-making-a-fool-out-of-himself-says-judge-judy-20140226

Scientology hits back at Leah Remini for leaving